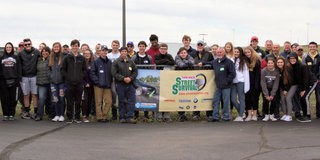 Ruth Huebner’s cell phone was ringing. It was her 20-year-old son, Trevor, calling; which was strange because he had just left home on his way to start off classes at Rutgers. “I’m calling to thank you, Mom,” Trevor said. When she asked what for, he replied: “For the driving course you made me take four years ago.”

Trevor was in his Honda Civic behind a large van on the highway and they had just passed a semi-trailer truck that was traveling in the right lane. Suddenly, the van swerved left and ran off the road toward a guardrail. Trevor was left staring at the left lane traffic at a full stop in front of him. With the right lane clear and aware of the semi not far behind, Trevor made a split-second dodge into the right lane in front of the truck while maintaining his speed and control.

Four years prior, she had enrolled the new teen driver in the Tire Rack Street Survival course hosted by Philadelphia Region of SCCA in Blue Bell, Pennsylvania. Years later, the driving exercises he practiced enabled Trevor to maintain control while avoiding a sure accident in hitting the stopped cars in front of him or getting smashed into by the approaching truck.

“He said it was exactly the kind of split-second lane change he had been directed to practice in the course,” explained Ruth.

In 2019, SCCA Regions hosted more than 50 Tire Rack Street Survival schools, eclipsing the prior year’s record of 45 schools. Much of this success is attributable to the great work of the SCCA Foundation’s Street Survival Coordinator, Scott Dobler, who has done amazing work in recruiting new SCCA Regions to host schools, and supporting Regions who have done so for years. The SCCA Foundation is able to fund Dobler’s efforts and support the Region programs thanks to the generosity of donors who contribute through several fundraisers every year, including the upcoming winter sweepstakes featuring a trip to Jay Leno’s Big Dog Garage and the amazing Petersen Automotive Museum in Los Angeles.

Since its very first class in 2002, the Tire Rack Street Survival program has educated more than 21,000 young drivers about the maintenance needs of their vehicles and the maneuvers that will keep them safe in emergency situations. Each Tire Rack Street Survival class teaches licensed drivers between the ages of 15 and 21 important, potentially life-saving skills such as how to maneuver through a skid and how to avoid distractions while driving. At some classes, students get to sit behind the wheel of a semi-truck to experience the vehicle’s significant blind spots for themselves. Because students use their own vehicles during the program, they also learn how to check the air pressure of their tires, check the oil level and perform other routine maintenance to understand the responsibility that comes with driving their vehicle.

Tire Rack Street Survival schools are facilitated by chapters of the Sports Car Club of America, BMW Car Clubs of America and Canada, Porsche Club of America, Audi Club of North America, the National Corvette Museum and other auto enthusiast clubs where a trained volunteer instructor base can be utilized. For more information and a schedule of upcoming Tire Rack Street Survival® classes taking place in various locations across the country, visit www.streetsurvival.org.