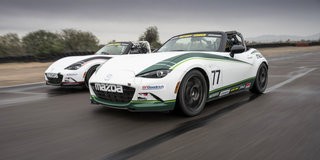 Mazda Motorsports has unveiled the list of drivers nominated for the 2019 Mazda Road to 24 Shootout, and many of the participants are Sports Car Club of America® competitors.

The Shootout, scheduled for December 3-4 at the Michelin Laurens Proving Grounds in Mountville, South Carolina, will award the winner with a $100,000 scholarship to compete in the 2020 Battery Tender® Global Mazda MX-5 Cup presented by BFGoodrich Tires. The winner’s car will carry the Mazda’s Soul Red Crystal on their Global MX-5 Cup car throughout the 2020 season.

Winning a club racing championship while driving a Mazda or Mazda-powered car is the primary way to be nominated for the Mazda Road to 24 Shootout, while At-Large nominees are also considered. Nominated drivers must submit a written and video proposal from which the finalists will be selected for the one-day Shootout.

The 2018 Mazda Road to 24 Shootout winner, SCCA® racer Michael Carter, captured the Global Mazda MX-5 Cup Rookie of the Year championship and finished a strong fourth in the overall championship.

Click here to review the full list of drivers invited to participate in this year’s Mazda Road to 24 Shootout. Good luck to all!