SCCA In the Media: The Runoffs 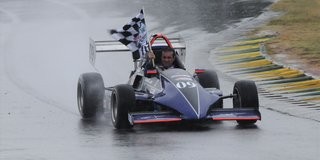 The SCCA® National Championship Runoffs® has completed its 56th running. SCCA members familiar with the annual gathering know it’s easily the best, most exciting three days of road racing anywhere in the country. The sound, color and action make it a “bucket list” event for many motorsport enthusiasts. And to scores of others, it’s a “mustn’t miss” activity each year -- with a large number of folks having attended a string of Runoffs in a row.

While many within our Club know the Runoffs is something special, it’s still nice to hear it from someone else every now and then. Take, for example, the glowing review produced by Hagerty.com writer Larry Webster, who was onsite to cover the National Championship this year at VIRginia International Raceway.

“Every year since 1964, the Sports Car Club of America invites the nation’s best amateur road racers for a one-race grudge match to decide who’s best. The result is three days of the year’s finest road racing,” Webster wrote recently in an article titled The SCCA Runoffs is like Woodstock for car lovers. “The Runoffs last a week, with qualifying and practice over the first few days and the last three for racing. There’s a lot of downtime between sessions, more than enough to tweak the cars, so the entrants and crew fill the evenings with informal tent parties and cookouts. For many, the event is a vacation.”

The festival-like atmosphere certainly adds to the Runoffs’ ambiance. But, according to Webster, the racing is simply amazing, too. An “amateur” championship in theory, the performance of Runoffs competitors equals that of drivers at any pro racing event.

“Friday’s races … were the opposite of a Formula 1 event. None of the winners had an easy run to the checkers with thrilling battles throughout the field. Few drivers made dumb mistakes, they all drove with precision and while I expected a very cutthroat NASCAR-like demolition derby, the reality was fierce but clean racing. I saw numerous instances of cars going three abreast into a turn and they all came away unscathed. Everyone had expert command of their cars and they obviously respected each other on the track.”

Take a minute and check out Webster’s full article here.