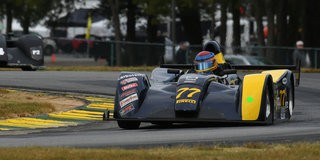 ALTON, Va. (October 13, 2019) – Tray Ayres, of Gainesville, Georgia, left nothing on the track as he sealed up his 2019 season with his second SCCA National Runoffs® Championship title on Sunday, his first in Prototype 2. It was a perfect dance around the 18-turn, 3.27-mile VIRginia International Raceway (VIR) circuit for Ayres in the No. 77 Ayres Racing Van Diemen RF00 Mazda as he made the 15-lap race look effortless.

“I am feeling pretty good after winning that race,” said Ayres. “There was some tight racing out there today and that doesn’t happen very often in this class. That was really fun. The track for me was a bit cooler than we expected for the set up, so the car was a bit of a handful especially early on. Being new to this class, we had a lot of long nights with a lot of work to get us here. Our goal was to get on the podium this weekend and I am happy to be at the top.”

While Ayres stole the show, he had plenty of action happening in his mirrors. On the opening lap, turn one collected three cars, including 2019 GT-Lite National Champion Peter Shadowen. After an extended cleanup, the fight was on at the restart. Robert Iverson pulled an early lead before Tim Day Jr. used the draft off Ayres’ to take second, but Ayres repaid the favor the following lap to retake second. Ayres chased down lap-leader Iverson, overtaking on the inside of turn two for the lead.

Nursing a damaged wing from the early race, turn one melee, Pancea entered the podium fight in third. Shifting focus from leader Ayres to trying to fight off Pancea, Day dropped wheels off in Hog Pen on the penultimate lap and the unforgiving turn sucked him right into the grass. Day continued,v but the misstep ended his fight for podium position.

Shaking Day, Pancea patiently finished the last two laps in his No. 98 GDRE/Tail Arik/Summit Racing/Avon Stor WF1 Suzuki as not to suffer the same fate as the drivers in front of him. He finished the race in second, his third Runoffs podium of his career.

“I started fifth and it was important for me to get a good start, and then I got hit from behind twice before even getting into turn one,” explained Pancea. “I made it through turn one sideways and after that I thought to myself, I need to keep this clean. Our rear wing was all bent up and it really affected our race today, but we kept it together to pull off a second-place finish.”

Gyann’s day was all about patience. Dropping down to fifth after the restart, Gyann set back and watched the leaders battle. When they lost the war, Gyann, was there to take their place. Gyan’s No. 83 Argus Magnetics/Gycor International Stor WF1 Suzuki was the fastest P2 car on the track today, and on his way to his third National Runoffs podium, he set a new track record with a fast time of 1:50.258 seconds.

“I was trying to keep my patience as much as possible on the racetrack and it turned out to be a really fun race,” said Gyann. “We were bunched up for a couple laps, and that’s probably the longest I’ve been bunched up together in this class. The car was fast, but the leaders were too far gone for me to challenge because the track just wasn’t as grippy as I would have liked it to be, but it was a great race and I’m ready to do it again.”