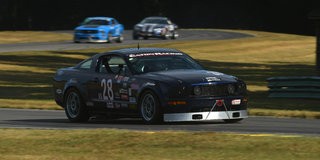 ALTON, Va. (Oct. 11, 2019) -- Over the years, American Sedan (AS) has produced some unexpected occurrences and amazing moments during SCCA’s National Championship. Tire Rack Pole Award winner Gregory Eaton, of Woodbridge, Virginia, didn’t want any surprises this year, and his wish was granted as he drove his No. 28 Eaton Racing and Development Ford Mustang to a flag-to-flag victory, claiming his first Runoffs victory at VIRginia International Raceway on Friday.

“I don’t know if I drew it up like that, but I sure as heck was hoping for it,” Eaton said after completing the 15-lap race around VIR’s 18-turn, 3.27-mile circuit. “It’s unbelievable. I’ve been coming here to VIR for a long time, and each year I get a little faster.”

Behind Eaton, however, things were interesting as several competitors did their best to claim the last two podium spots. Daniel Richardson, in the No. 15 Hoosier/GentiumTech/AutoGear/ProSys Chevrolet Camaro, started second but pulled off course on the first lap after his car appeared to have an issue. Andrew McDermid, in the No. 24 WeatherTech/Felice Engines/Hoosier Ford Mustang, slotted into second followed by the No. 56 Hoosier/Mobil1/Hawk Chevrolet Camaro of John Heinricy, the No. 14 Iron Works/Yanek Custom Gun Ford Mustang GT of James Jost, the No. 57 TAR/Hoosier/Hawk Pontiac Firebird of Amy Aquilante, the No. 34 Hoerr Racing/Hoosier/Roux/PAGID Ford Mustang of Bryan Long, and Stephen Ott in the No. 07 ORSW Racing/Protex By Bardahl Ford Mustang.

By lap three, Aquilante dropped back and Jost moved up to chase Heinricy. Soon after, Jost was by Heinricy and had his eyes set on McDermid who had dropped two seconds behind Eaton. Three laps later, McDermid had fallen back and was gobbled up by both Jost and Heinricy.

A full-course yellow bunched up the field and while Jost had a good restart when the green flag flew again, Eaton stayed strong and reestablished a gap. As laps dwindled, Heinricy got right up behind Jost and actually poked by to take second for a moment. But Heinricy spun soon afterwards, which allowed Jost, who also set a new AS track lap record at VIR, to secure the runner-up spot, his first Runoffs podium finish.

“I just kept driving,” Jost said about the battles out on track that led to his first Runoffs podium appearance. “I just keep going. I never expected to be here. It was awesome.”

Heinricy was able to get his car out of the grass without losing a position and came home third. Ott and Long both ended up getting around McDermid to finish fourth and fifth respectively, and the Sunoco Hard Charger award went to the No. 97 Ford Mustang of Jason Smith who started eleventh and finished seventh.

Photo: Gregory Eaton on his way to an American Sedan Runoffs victory