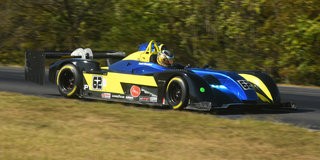 ALTON, Va. (Oct. 11, 2019) -- One of the fastest car classes in Sports Car Club of America® competition, the Prototype 1 (P1) field was led to the start Friday morning by Tire Rack Pole Award winner Todd Slusher, of Las Vegas, Nevada. Slusher, driving the No. 62 Hempsun Farms Elan DP02 Mazda, immediately grabbed the lead with teammate Chip Romer, of Lake Havasu City, Arizona, in tow.  For the rest of the field, that was the last they saw of Slusher and Romer as the duo went on for a one-two finish at VIRginia International Raceway (VIR) during the 56th annual SCCA® National Championship Runoffs®.

Slusher, who has only driven at VIR a handful of times before, had a car that came off the hauler fast. The team made no adjustments during three days of qualifying, other than to change tires. For Slusher, this is his first Runoffs victory in four attempts. During the 15-lap race on VIR’s 18-turn, 3.27-mile circuit, he also managed to set a new P1 track lap record. And while everything may have looked easy for Slusher to fans watching trackside, a win at the Runoffs is rarely a total cakewalk.

“I just tried to focus on driving the track,” Slusher said after the race. “I had one moment when the backend came out on me a little bit right before the Esses and I got a little fishtail going in the dirt. That was toward three-quarters of the race and that’s when I knew that the tires where going away a little bit.”

Romer, in the No. 29 Stella Artois Elan DP02 Mazda, finished second about 13 seconds behind his teammate. This was Romer’s first podium finish at the Runoffs in three attempts.

“As a team, we just had a plan to finish one-two, somehow” said Romer, who drove the race without an in-car radio. “Our plan was one-two, and we executed.”

The race for third was where the action was really at during the P1 event. Jim Devenport, in the No. 23 Norma Cranbrook Group Inc. M20FC Honda, jumped to third place and held that spot for the first half of the race. However, the No. 19 HalifaxPlantation.com Elan DP02 Mazda of Todd Vanacore was right on his tail, followed by the No. 94 RAACE Elan DP02 Mazda of Darryl Shoff, the No. 33 The Door Company Stohr WF1 Suzuki of Greg Bell, the No. 6 Kohler/Hoosier/Millenium/Redpaw WynnFurst Kohler of Jason Miller, and the No. 88 CAS Group Elan DP02 Mazda of John Mcaleer.

With about five laps left, Devenport’s car faded and Vanacore took over the third spot. But behind him, Miller was on a mission, moving past other competitors and closing in for the final podium spot. On the very last lap, Miller got a good run off Oak Tree Curve and passed Vanacore going into the Roller Coaster corners and went on to claim a hard-fought finish in third, and claimed the Sunoco Hard Charger award for coming up from his seventh starting position. Vanacore took fourth and Devenport fifth.

“I didn’t see the white flag. I didn’t know it was the last lap,” Miller said, admitting he didn’t plan the last-lap move. “The bottom line is, I race hard regardless of the end. It’s what I do. It’s just my thinking.”

Photo: Todd Slusher took the Prototype 1 win at the 2019 Runoffs