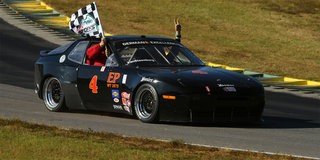 Prather, from Topeka, KS, jumped to a lead in the No. 34 JPM/Hoosier/Carbotech BMW Z3 on the start but his advantage was cut down when Greg Amy spun the fire-engulfed No. 33 Honda Civic to a stop in turn one, bringing out a full-course caution.

On the lap-five restart Van Steenburg went hard after Prather and got ahead on the exit of turn one but then missed a shift, handing the lead back to Prather.

“I went to grab the gear and completely missed,” Van Steenburg said, who knew the mistake could make the rest of the race very tough. “When Jesse gets in front of you, you think, ‘I’ll see if he makes a mistake,’ and it’s usually not going to happen.

Rare as it may be, Van Steenburg didn’t have to wait long for the mistake from Prather, who pushed a little too hard on tires cooled from the full course yellow and slid off track in Turn 10.

“The mistake he made is exactly the same as I made in qualifying,” Van Steenburg said. “I was watching in slow motion exactly what I had done.”

From there, the eventual winner took a focus-forward approach and managed the tires on his heavier Porsche to maintain the gap over Hainsworth.

Hainsworth, driving the No. 95 Maximum Attack/Hoosier/Carbotech Mazda RX-7 found himself in unexpected company while driving to second place in a week which saw plenty of adversity, including losing an engine on the test day and having transmission problems in qualifying.

“I was trying to stay on his draft on his bumper waiting for a mistake that never happened,” said Hainsworth.

Meanwhile, Tire Rack polesitter and early leader Prather was putting on a ferocious drive to claw his way back from his spin and get back to the podium. After a few moments to let the dirt escape his car Prather started fighting and set a new track record for E-Production in the process, with a lap of 2:01.631 (96.785 mph).

“I just put my head down and pushed for all the car had,” said Prather, “it was more like qualifying laps than race speed, but you have nothing to lose at that point,” said Prather. “I’m disappointed because the week went so well but all in all you come to the Runoffs and get on the podium it couldn’t be better,”

(Edit after final results audit) The Sunoco Hard Charger of the race was Darryl Pritchett, of Daytona Beach, FL, who drove the No. 92 Angry Sheep Motorsports/G-Loc BMW Z3 2.5L a from 25th starting position to 16th place.