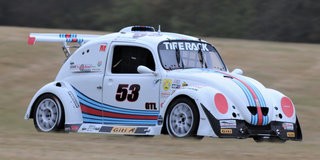 It’s the third and final day of qualifying for the 2019 SCCA National Championship Runoffs taking place at VIRginia International Raceway. Audio-only coverage of qualifying is broadcasting now at SCCA.com/live. Qualifying commentary is supplied by longtime Runoffs pit reporter Heyward Wagner, as well as Gregg Ginsberg (Super Tour Radio), Andy Hollis and Larry MacLeod. Audio commentary of the three race days will be supplied by the Super Tour Radio presented by Hoosier Racing Tire broadcast team consisting of Mike Wolfe, Bob Steele, Andy Delay, Brian Donati and Ginsberg. Along with the audio feed, SCCA.com/live will have live timing and scoring for all qualifying and race days.

Can’t Keep a Good Guy Down

It has been an eventful year or so for Greg Maloy, a Super Touring Lite driver from Detroit Region. During an SCCA regional last year at Mid-Ohio Sports Car Course, Maloy was involved in an incident that resulted in a concussion and broken car. After spending the whole winter rebuilding his Honda CRX, he looked for another way to get his fix of racing.

“I’ve been autocrossing since I got my driver’s license. I used to Solo my CRX, but a friend of mine has a Formula F that is set up for autocross,” Maloy said. “I do ProSolos and the Solo Nationals. It’s a good way to stay in competition mode and stay focused when I am not working on the road racing car.”

“It was hard to get back up to speed after my crash last year. I lost a little bit of the edge because of the little bit of fear that was there,” Maloy admits. “It took a couple races and a lot of seat time to get back to speed, which I couldn’t have done without Solo.”

Despite the big difference in cars between a road racing STL car and Formula F autocross sled, Maloy has immensely enjoyed driving both. He wishes more people would do both Solo and road racing because of how fun and fierce the competition can be week in and week out.

This is Maloy’s first-ever Runoffs, and he’s qualified fourth as of Wednesday evening in the highly competitive thirty-five car STL field.

In the past two weeks, B-Spec driver Justin Barbry has gone from coaching drivers on how to get their best lap at the SCCA Tire Rack Time Trials Nationals presented by Hagerty to fighting for his own best lap in the No. 95 Honda Fit in qualifying sessions at the SCCA Championship Runoffs®.

Barbry has been a regular driver coach this year on the Tire Rack Time Trials National Tour, coaching at four of the 10 National Time Trials events where competitors focus on getting their fastest laps instead of vying for track position as drivers do in road racing. As an SCCA Time Trials driver coach, Barbry helps drivers strategize how to work with one another to get good laps while also competing against each other.

“It’s a lot like road race qualifying,” said Barbry. “The goal is to get out and get your best lap, while trying not to get caught up in traffic.”

There are some differences, of course. The strategy in most of the popular enthusiasts cars at Time Trials is to get a clear lap with no one around, which is a lot different than the performance-matched B-Spec cars which are highly dependent on the draft for good lap times.

“I didn’t go fast enough out of the pits and lost the lead group,” said Barbry, who dropped from fifth to seventh after Wednesday’s qualifying session. “I know if I can get in the pack with them, I can run times with them.”

No matter where he ends up in qualifying or on race day, Barbry is taking the Time Trials message of “first and foremost, it’s you versus yourself” and applying it to his first Runoffs® experience.

Photo: Bryan Scheible and his Volkswagen Fun Cup Beetle at the 2019 Runoffs