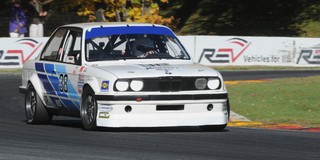 Of course, the 1987 BMW 325is Schreyer pilots in SCCA Road Racing is no longer being used to hustle meals around town, but it was his first car, and he did use it to deliver pizzas in high school.

When Schreyer and his dad, Bernie—a racer and fellow gearhead—were shopping for his first car, they had a couple of options.

They almost brought home a Volkswagen GTI. But one look at the BMW for sale nearby and they knew it was the car. Bernie even had to drive the car home from the dealership because Tim didn't know how to drive stick yet. But after a few lessons, Tim was hooked.

He drove the car throughout high school and, yes, delivered pizzas in it. Over the winter break from college one year, he and his brother decided to dive into motorsports and put a roll cage in it, and it was downhill from there. Tim had already been modding virtual cars—thanks to 1999 PC racing game Sports Car GT—and it turned out he could apply what he'd learned about adjustable shocks, brakes, ride height, and more to wrenching on his BMW.

Tim says it was "an absolute blast" transforming what used to be his daily driver into a full-blown racecar to get into regional racing in the Midwest, where he found a lot of success.

After losing his brother to cancer in 2017, Tim and Bernie vowed to keep the family racing spirit strong. In 2018, Tim joined SCCA to race in the Northern Conference, and in 2019, he brought home the U.S. Majors Tour Northern Conference Points Championship.

This year marks Tim's first time competing at the Runoffs—a race he grew up watching with his family on TV—and now he's got the chance to go head-to-head with the country's top E Production drivers.

"I woke up this morning with jitters, and they were there until the 5-minute grid call, then it was visor-down and go." Ultimately, Tim drove a great race and ended up placing fifth.

We asked Tim what it felt like to do so well in a car that he had shared such a great history with. "That car is pretty special to me, obviously. And it's cool that it's been following my racing career this long. I think every racer always wants to do better, but I don't think anybody's going to be mad about a fifth place finish in their first Runoffs. We're pretty new to E-Prod, and we're competitive, and the fact that we're still a family effort is what makes it neat."

From high school daily driver to prepped racecar, Tim's story shows that when looking for a racecar doesn't always mean going out to buy a new (to you) car.

You can watch Tim duke it out in car #38 in E Production Here in our on-demand videos of all of our Runoffs races.