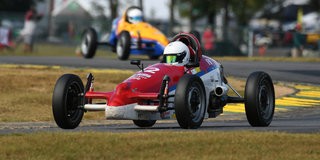 ALTON, Va. (October 12, 2019) – From first to third and back to the front again, all on the last lap, was the formula for Andrew Whitston, of Neenah, Wisconsin, to take his first SCCA National Championship Runoffs victory on Saturday in Formula Vee. Hunter Phelps-Barron, of Longview, Texas, and brother Zachary Whitston, of Austin, Texas, were both in the mix and joined Andrew on the podium.

Just 0.097 of a second separated first from third, and 0.080 from first to second, at the finish after 15 laps and 49 miles of racing on the 3.27-mile VIRginia International Raceway (VIR) circuit, with the winner shooting to the front with a strong run out of the final corner and down the long front straight. The newly crowned National Champion’s No. 12 Subway/RocketRon/Hoosier/Carbotech Protoform P2/Volkswagen covered the distance in 35:09.214, averaging 85.226 mph.

The win was the first of Whitston’s Runoffs career and his third podium after two previous runner-up finishes.

“It feels awesome,” Whitston said. “I’ve been so close, so many times, and it’s just this monkey that’s been on my back. You get done with the Runoffs every year and it doesn’t work out and you’ve got three months to think about it. I live in Wisconsin, and it’s snowing and miserable. You’ve got a full year, if it doesn’t work out, to just sit and think about it. It feels so good to never have to be in that situation again.”

Whitston ran early in the race with Andrew Abbott, pulling away from the field in a two-car breakaway. That ended as Abbott began spewing smoke and oil, which in turn ended Abbot’s day on lap eight.

“He did such an awesome job, and he was flying,” Whitston said of Abbott. “Unfortunately, he had a mechanical issue. There was so much oil that every time he got ahead of me; I couldn’t see. I was slowing down just so I could see, and I think that helped these guys.”

Now running alone without a drafting partner, the younger Whitston and Phelps-Barron quickly closed to the back of Andrew’s Formula Vee, making it a three-car battle for the podium positions.

“I had a couple of spots that I had my secrets, and Hog Pen was one of them,” Andrew Whitston said. “I knew that if I was going to be running with anybody else, the last lap I wanted to come out at the back of the pack, second or third. I felt like I had enough of an advantage. I opened up a gap so I could just run the corner the way I liked to do it. I nailed it and got a great run. They gave me a great draft up to the finish and it was beautiful.”

The trio crossed the line for the final lap with Andrew leading the Whitston clan, with Phelps-Barron trailing and looking for an opening. Andrew watched as Zachary’s No. 21 Whitmoore and Associates Protoform P2/Volkswagen and Phelps-Barron’s No. 113 Barron Racing/Noble Engines Mysterian M3 went by.

That left one more opportunity to determine the final finishing order. Zachary led the way out of Hog Pen and onto the front straight for the final time, with Phelps-Barron drafting by. In prime position, however, was the more experienced Andrew Whitston, getting a drive out of the third slot and around the outside, clearing both before the checkered flag.

It was a strong finish in the first season of SCCA Formula Vee competition for Phelps-Barron, and his rookie Runoffs appearance.

“It feels amazing,” Phelps-Barron said. “Every guy out there is capable of winning this, it’s just a matter of being in the right place at the right time. For me, I knew I had to stay at the front pack. Luckily, me and Zach were able to catch back up. I was doing more of the pushing to keep myself where I wanted to be, but there were a couple of times that I knew they orchestrated something. That’s the name of the game. But I’m happy with how it turned out.”

The younger Whitston was as pleased with his bronze medal as anyone on the podium.

“I’m very happy where I am,” Zachary said. “I wanted to be with the front group. We got a podium, and that’s even better. I’m very happy. Andy and I have run together all year. We’re both very predictable together. It’s very comfortable. It’s been the story of me trying to chase and keep up all year, and man we had fun out there.”