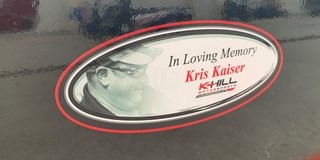 There’s a noticeable hole this weekend at Circuit of the Americas for the Hoosier Racing Tire SCCA® Super Tour. Though the transporter and K-Hill Motorsports team are at the track with a full slate of open-wheel entries, they are here with heavy hearts and without their longtime leader, Kris Kaiser, who passed away unexpectedly on Tuesday at 45 years old.

Kaiser, a stalwart at SCCA events for years, was a fixture in the open-wheel scene, both in SCCA road racing and in professional racing. One of the largest personalities in the paddock, Kaiser and team prepared cars that led to National Championships at the Runoffs for Steve Forrer, Connor Kearby, Ryan Norman and Neil Verhagen, among others.

Needless to say, it’s a bittersweet weekend for the K-Hill team. But whether or not to race was never a question.

“When Brandi (Kaiser, Kris’s wife) called, we said we’re not going to quit the weekend,” Mike Duncan, Kaiser’s right-hand man for 13 years at K-Hill, said. “Bob Perona, one of our driver coaches, called and asked if we were still on. I said, you know as well as I know if we don’t go to the race he’s going to be pretty mad. We kept on trucking south and called all the drivers and told them the weekend is on. We’re going to do this as we usually do.”

When speaking of Kaiser in the paddock, the common thread is “respect.” Everyone knew the road to the checkered flag went through any K-Hill cars in the field at any given weekend.

“I’ve heard from people that I didn’t even know,” Duncan said. “That was the hardest part, driving down here, once all the family knew and the public knew I was getting phone calls from numbers I wouldn’t normally answer. A lot of it was ‘hey, I was friends with Kris, and had your number through him.’ But even people who Kris had not been the best of friends with or had the best relationship with, they called. Every person in the paddock, they all had a respect for him because he always wanted to succeed, and always wanted the series to succeed.

“He came here strictly to win,” Duncan continued. “We’ve had guys from the shop drive 10 or 11 hours overnight because we heard an engine and we knew the kid was fast. That’s the concept between every person here at K-Hill. We weren’t going to come in and be ok with second. We give the drivers the best car that we can give them.”

Duncan now takes on the challenge of keeping the K-Hill team at the top of the heap. It wasn’t a job he asked for, but a challenge he’ll take on for his friend and boss.

“We’re going to do everything we can to keep K-Hill Motorsports rolling,” Duncan said. “We have a lot of good customers and good people that surround us. I’ve been approached by many people this weekend offering if we need anything, let us know. Our customer base is really good. They’re really supportive. There was no question of what should I do with my car, or are we going to be able to make it to an event, things like that. There’re no questions, because they expect we’re just going to keep rolling.”

The tributes rolled in all week through social media, with former drivers and competitors expressing shock. To a person, all realized the loss the open-wheel community will feel.

Though Kaiser sadly leaves behind his parents, wife, a 10-month-old daughter and seven step-children, he also leaves behind a work ethic that has been passed on to everyone on the K-Hill team. So while Kris may no longer be in the paddock, there’s no doubt that the memories and his legacy will continue at K-Hill Motorsports and beyond.